Is the debate between "first-cause" and "dependent origination" a fool's debate?

Jurisdiction
But unknown at this time

Please make sure that you read this carefully, especially read the ending. I'M NOT SAYING THEH RELIGIONS ARE COMPATIBLE OR ARE SECRETLY TEACHING THE SAME THING. I'm merely saying that on this one, peculiar, particular concept, there may actually be reconciliation.

However, here's the kicker.

In Saint Basil the Great and Saint Maximus the Confessor's writings, you will find that these two brilliant Fathers of the Church argued that God has three modes of being related to time - aidios, aeon, and chronos. "Aidios" is "time beyond time" itself - incomprehensibly, God how he exists before He "created" anything (as God is beyond time and space altogether). "Aeon" is eternity - it itself is a creation of God, but it's eternity - and it's where the angels dwell. "Chronos" is linear time, which is where we live.

However, here's my question - if God exists beyond time and space itself, in "aidios", how does He "cause" things as a "first cause" (because isn't quantifying causality as a "first" cause suggesting boundness to the rules of time itself - in fact, is using the language of "cause" correct, considering "cause" suggests boundness to space itself)?

And now, dependent origination - if you look within something like Daoism or Buddhism, you will find that each of these religions teach some greater ultimate reality that is beyond time and space itself from which all things emanate - "The Dao", "Emptiness of Nature" (that is, emptiness of categorization)", etc.

"The Tao is what gives Taoism its English name, in both its philosophical and religious forms. The Tao is the fundamental and central concept of these schools of thought. Taoism perceives the Tao as a natural order underlying the substance and activity of the Universe. Language and the "naming" of the Tao is regarded negatively in Taoism; the Tao fundamentally exists and operates outside the realm of differentiation and linguistic constraints."

"The field of boundless emptiness is what exists from the very beginning. You must purify, cure, grind down, or brush away all the tendencies you have fabricated into apparent habits. [Those tendencies are the clouds in our eyes.] Then you can reside in a clear circle of brightness. Utter emptiness has no image. Upright independence does not rely on anything. Just expand and illuminate the original truth unconcerned by external conditions. Accordingly, we are told to realize that not a single thing exists. In this field birth and death do not appear. The deep source, transparent down to the bottom, can radiantly shine and can respond unencumbered to each speck of dust [each object] without becoming its partner. The subtlety of seeing and hearing transcends mere colors and sounds. The whole affair functions without leaving traces and mirrors without obscurations. Very naturally, mind and Dharmas emerge and harmonize"

However, I think as far as "time" and "causality" is concerned, I wonder if both philosophical traditions are talking past each other.

Both seem to recognize a single common "source" that is beyond causality and time altogether, but they are trying to use linguistic usage of "causality" and "time" (firstness and causality) to describe this "source".


What do you guys think?


Here's a picture that tries to explain what I'm saying 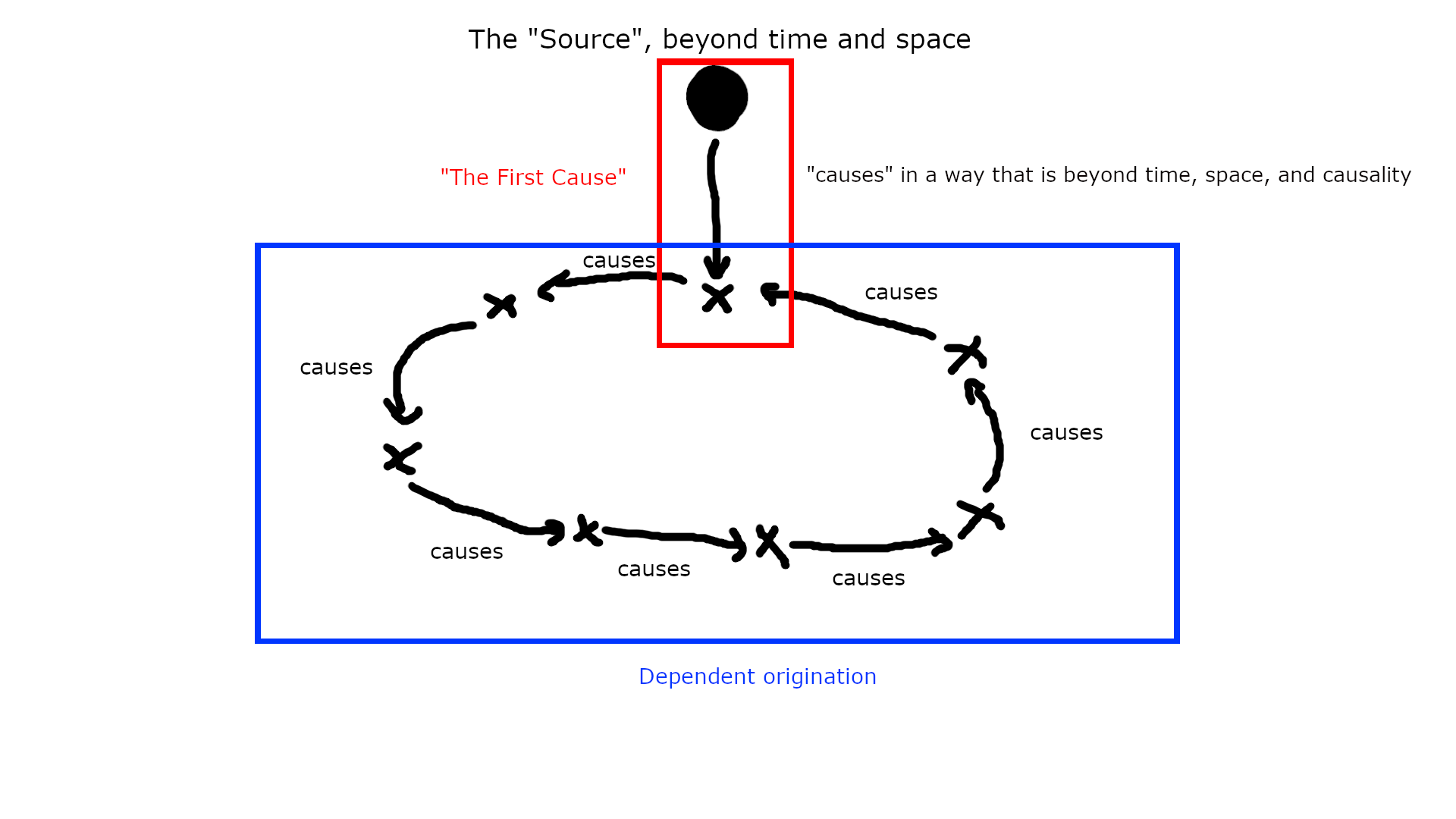 Orthodox don't really have that problem. In part to the essence/energy distinction.
M

dependant origination in Buddha Dharma makes no sence.you need omnipotence to create anything anew and infinite regression is impossible.also shunyata is not a affirmation.or a negating affirmation.they literally with this doctrine believe things pop out of nothing..and kshanikavada also says the same thing.
You must log in or register to reply here.
Share:
Facebook Twitter Reddit Pinterest Tumblr WhatsApp Email Link
Top