I know about The Bible Scriptures, some Holy Church Father quotes and about The Fifth Ecumenical Council but I wanted to ask if you all might have some other good resources that condemn it.

"An Ever-Burning Gehenna Will Burn Up The Condemned, and A Punishment Devouring With Living Flames; Nor Will There Be Any Source Whence At Any Time They May Have Either Respite Or End To Their Torments.
Souls With Their Bodies Will Be Reserved In Infinite Tortures For Suffering."
• Saint Cyprian of Carthage - The Treatises of Cyprian - Treatise 5 (V) -
An Address to Demetrianus - 24.
(200-258 A.D.)


"For the prophets have proclaimed two advents of His: the one, that which is already past, when He came as a dishonoured and suffering Man; but the second, when, according to prophecy, He shall come from heaven with glory, accompanied by His angelic host, when also He shall raise the bodies of all men who have lived, and shall clothe those of the worthy with immortality, And Shall Send Those Of The Wicked, Endued With Eternal Sensibility, Into Everlasting Fire With The Wicked Devils."
• Saint Justin Martyr - The First Apology of Justin - Chapter 52 - (100-165 A.D.)


"Thus also The Punishment of those who do not believe the Word of God, and despise his advent, and are turned away backwards, is increased; Being Not Merely Temporal, But Eternal. For to whomever the Lord shall say, “Depart from me, you cursed, into everlasting fire” [Mt 25:41],
These Will Be Damned Forever!"
• St. Irenaeus of Lyons - Against Heresies 4:28:2 (189 A.D.)


3.
..... "And To The Lovers Of Iniquity Shall Be Given Eternal Punishment. And The Fire which is Un-quenchable and Without End Awaits These Latter, and a certain Fiery Worm which dieth not, and which does not waste the body, but continues bursting forth from The Body With Unending Pain. No sleep will give them rest; no night will soothe them; no death will deliver them from Punishment; no voice of interceding friends will profit them."
• Saint Hippolytus of Rome - Extant Works and Fragments of Hippolytus - Part II.-Dogmatical and Historical - Against Plato, on the Cause of the Universe - 3.
(170–235 A.D.)

Anathema to Origen and to that Adamantius, who set forth these opinions together with his nefarious and execrable and wicked doctrine and to whomsoever there is who thinks thus, Or Defends These Oinions, or in any way hereafter at any time shall presume to protect them."

"Those Who, Like Origen, Think That Hell Is Not Everlasting, And Thereby Afford Or Offer The Liberty Or Incentive To Sin, Let Him And All Such Persons Be ANATHAMA."


The Synodikon of Orthodoxy

Whosoever, therefore, shall confess Me before men, him will I confess before My Father which is in heaven. But whosoever shall deny Me bef... 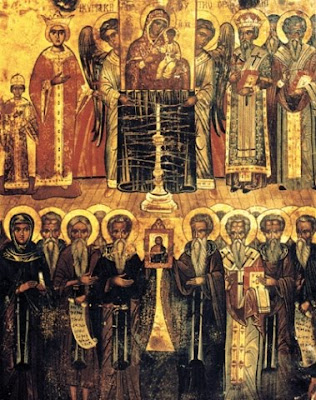 When You, O God, shall come to earth in glory, *
all things shall tremble and the river of fire shall flow before Your judgment seat; *
the books will be opened and the hidden things revealed. *
Then deliver me from the unquenchable fire, *
and make me worthy to stand at Your right hand, O righteous Judge.