LBK said:
The above icon is inscribed Sobor (synaxis, assembly) of the Mother of God, and is the festal icon for the day after the Nativity of the Lord. The icon is also known as All Creation Rejoices in You, and is a visual counterpart to the hymn to the Mother of God of the same name, sung at the Divine Liturgy of St Basil the Great:

The version Dominika has posted is simplified compared to most other compositions, but retains some of the features distinctive to this icon type: the magi presenting their gifts to the enthroned Mother and Child, the assembly of angels, and things of earth such as hills and vegetation. The two haloed saints in the lower half are St John of Damascus on the left, and St Kosmas of Maiuma, iconographers who wrote a great number of hymns to the Mother of God.
Click to expand...

You can always rely on LBK regarding the icons subject You're knowledge is really amazing.
I knew the type of this icons and of which feast it is, however couldn't say all these special featus, so thank you
You wrote about the hymn to the Theotokos from st. Basil's Liturgy, so I have a question: is there any difference between the icons "Assembly of the Theotokos" (Sobor Bogorodici) and "All creation rejoices in you" ("O Tebe radujetsja")? Is it actually the same icon or they're distinct but with some differences?

Dominika said:
You can always rely on LBK regarding the icons subject You're knowledge is really amazing.
Click to expand...


Dominika said:
You wrote about the hymn to the Theotokos from st. Basil's Liturgy, so I have a question: is there any difference between the icons "Assembly of the Theotokos" (Sobor Bogorodici) and "All creation rejoices in you" ("O Tebe radujetsja")? Is it actually the same icon or they're distinct but with some differences?
Click to expand...

The different names refer to the same icon type. Not 'strange' but beautiful.
I d/l it and thanks.

The four mystical creatures at the periphery of the spiral (lion, ox, youth, and lion) are a feature of icons of Christ in Majesty, where Christ is enthroned in heaven, surrounded by a mandorla of uncreated light filled with seraphim, and with cherubim at His feet. The four creatures are in the corners of the composition:

Given that these creatures are so closely associated with the throne of God, it seems problematic to see them surrounding an assembly of saints.

IIRC this was discussed earlier in this thread, or in the Schlock Icons thread.
L

IIRC this was discussed earlier in this thread, or in the Schlock Icons thread.
Click to expand...

IIRC this was discussed earlier in this thread, or in the Schlock Icons thread.
Click to expand...

And what can you tell LBK about the Gregorian fresco I'd posted earlier in this thread; is it "correct" to depict the people in icons in such shape and with these a kidn illuminations (?) ? Or is it just a Georgian type of icons that's not familari for Slavs, Greeks, Arabs etc. ?

I'm not very familiar with traditional Georgian iconography, most of the Georgian icons I've seen would have been painted quite recently, so I can't say how faithful the image you posted is to traditional styles.

This type of icon is common in Romania and other places. Nothing strange or schlock about it.

No, this is definitely not a traditional Georgian style. That said, I kinda like it.

^^ That's interesting as the church looks relatively old (ofc not so old as the most famous Georgian monasteries)
Another picture from this church: 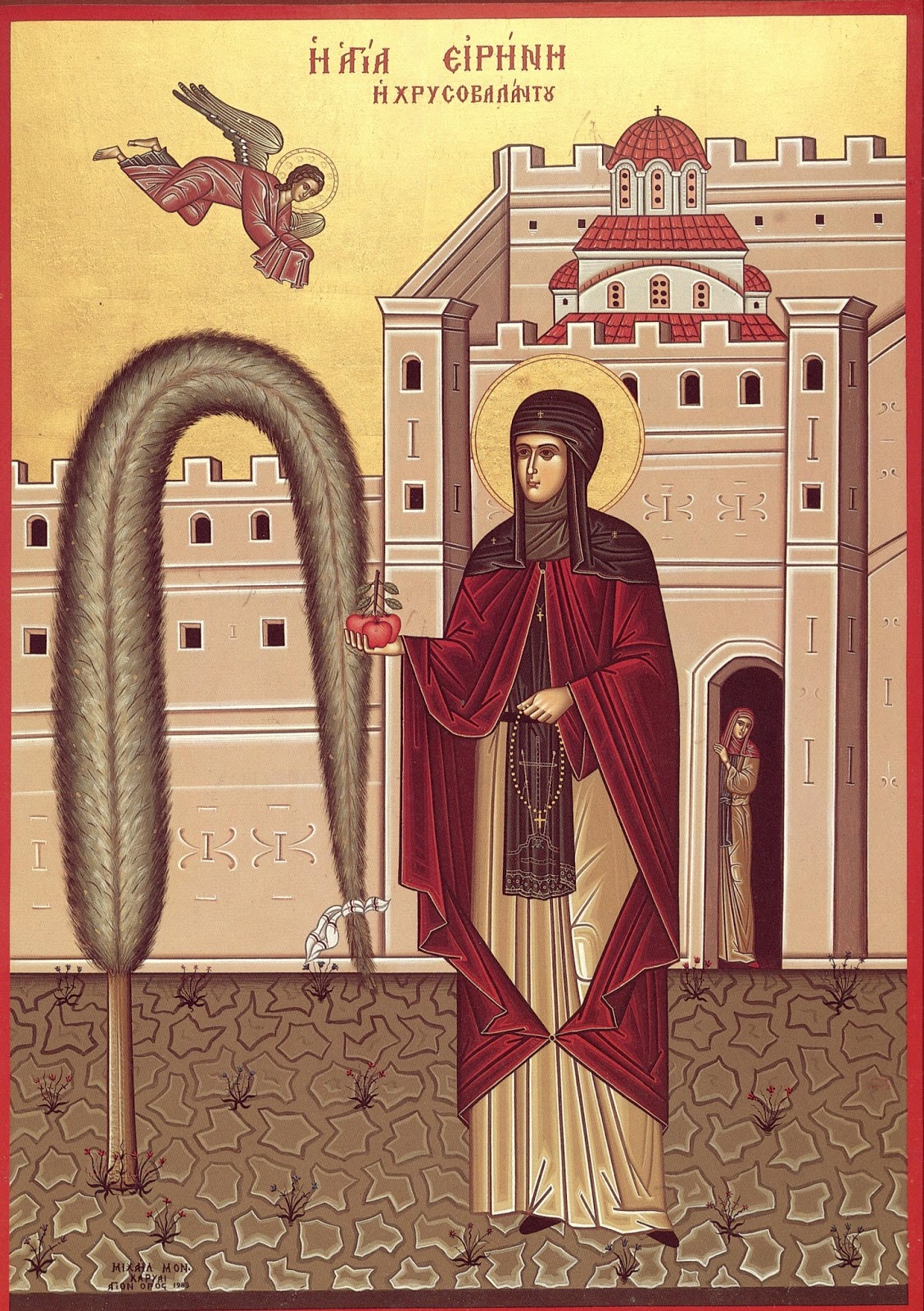 The egg (and not only) - maybe it has been posted before

From the life of St Irene Chrysovalantou:

On great feasts it was the custom of Irene to keep vigil in the courtyard of the monastery, giving thanks for the awesome beauty of creation. During one of these vigils one of the nuns, who was unable to sleep, left her cell and entered the courtyard. The nun was blessed to see Irene motionless, in prayer and levitated a metre off the ground, with two cypress trees bent to the ground before her. After Irene had finished, she blessed the trees and they returned to standing upright.

At first, the nun thought this to be a vision of the evil one. Afterwards, when others of the sisterhood noticed handkerchiefs at the top of those trees, the nun who saw Irene related what she saw. In response to this the whole sisterhood was so excited that Irene rebuked them, focusing on the need for concentration of their own prayer rule and ordering them not to relate any miracles until after Irene's repose.

Thanks for the info ^^

Don't what type of Theotokos image it is

Dominika said:
Don't what type of Theotokos image it is

This was painted by a Greek, who has called it Mother of God "Bringer of Hope". I'm in no doubt that, apart from the well-known depiction of the Mother of God enthroned, this composition is of his own making.