I've been doing research on the Magi or Wise Men online and most of it is from a Western (and late Medieval) perspective. I am looking for information from an Oriental Orthodox (and Eastern Orthodox) perspective. I'd be interested in images, quotes from your saints' lives, comemmoration dates, and traditions. Thanks!

Maybe this is obvious to you but I found stuff quickly with this search in google:


Code:
You might want to include another OR with kings.

Not sure how far you got.

From the sixth or seventh century:

Thank you, Salpy. I hadn't seen the top image.

Are there any Armenian prayers or commemorations or traditions associated with the Magi? Were Armenians (at least a significant portion) Zoroastrian prior to conversion, as many of the Georgians were?

Are the Magi commemorated in the Armenian Church on Nativity as in the Byzantine churches, or do they have another date of commemoration?

I've heard that the Magi are commemorated on the same day as the Nativity (Jan. 6.)  However, I've never seen it on a calendar, so I can't confirm this for sure.  The big thing that happens on the Nativity is the commemoration of the Baptism of Christ, which involves the blessing of water.  That kind of overshadows everything else.  Perhaps Aram would know more about whether this is also the feast day of the Magi.

I wouldn't be surprised if there are prayers or hymns about the Magi, but I don't have the know-how to really dig them up.  Again, maybe Aram would be able to help here.

In terms of stories, I've heard that one of the Magi, Gaspar, reposed in Armenia.  This story, written up by Archdeacon George Leylegian, may be of interest to you:

Thanks again. Hopefully, we will keep getting more information.
S

There is "The Magi in Syriac Tradition" by Witold Witakowski but it looks like it isn't available for free online. Same person has also written one "in Ethiopia Tradition". 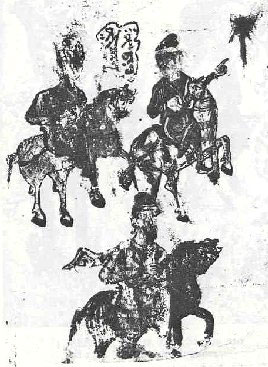 Riding horses and not camels.
G

Magis are mentioned many times in EO and Coptic hymnography (I don't know how it is in other OO traditions). And I think they're  commemorated on the first day of the Nativity in all Orthodox Churches

Fairly sure the OO traditions all recognise the names of the 3 wise men in their own local languages. Have read them in an Ethiopian book before if nowhere else. They are rather similar to those we know in the West from memory.

Salpy, with all due respect, wasn't Zurvanism considered a heresy by mainstream Zoroastrianism?
P

Was the star a plantery effect or an actual star ? In conjunction to the meanings these two mean in zoroasterism.
Jupiter symbolism was a new king to come?. Apparently in Armenian tradition there was more zoroasterism wise men who visited the child ?
L

psalm110 said:
Was the star a plantery effect or an actual star ? In conjunction to the meanings these two mean in zoroasterism.
Jupiter symbolism was a new king to come?. Apparently in Armenian tradition there was more zoroasterism wise men who visited the child ?
Click to expand...

I've read St. John Chrysostom mentioned in his Homily on the Gospel of St. Matthew that the star was special in that it actually moved to guide the magi to Bethlehem, and then physically descended to the stable where the Holy Family stayed so the magi could discern which house of the thousands in the city they were staying in.

that hence too thou mightest learn, that this was not one of the ordinary stars, for there is not so much as one star that hath this nature. And it not merely moved, but “went before them,” drawing and guiding them on in mid-day.

“But what need of this star any more,” one may ask, “when the place was ascertained?” In order that the Child also might be seen. For there was not anything to make Him manifest, since the house was not conspicuous, neither was His mother glorious, or distinguished. There was need then of the star, to set them by the place. Wherefore it re-appears on their coming out of Jerusalem, and stays not, before it hath reached the manger.
Click to expand...

I think Coptic tradition also holds that the magi were Zoroastrians from Persia. Thats actually why a star was used to draw them to Bethlehem, as the Zoroastrians were stargazers. As St. John Chrysostom also says:

And marvel was linked on to marvel; for both were strange things, as well the magi worshipping, as the star going before them; and enough to attract even such as were made all of stone. For if the wise men had said, they had heard prophets say these things, or that angels had discoursed with them in private, they might have been disbelieved; but now, when the vision of the star appeared on high, even they that were exceeding shameless had their mouths stopped.
Click to expand...

In other words, God used what the wise men knew (i.e. astrology) to make known to them the birth of Christ.
P

Didymus said:
Fairly sure the OO traditions all recognise the names of the 3 wise men in their own local languages. Have read them in an Ethiopian book before if nowhere else. They are rather similar to those we know in the West from memory.

Salpy, with all due respect, wasn't Zurvanism considered a heresy by mainstream Zoroastrianism?
Click to expand...